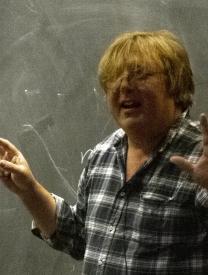 The topological origin of the Peierls-Nabarro barrier

Crystals and other condensed matter systems described by density waves often exhibit dislocations. Here we show, by considering the topology of the ground state manifolds (GSMs) of such systems, that dislocations in the density phase field always split into disclinations, and that the disclinations themselves are constrained to sit at particular points in the GSM. Consequently, the topology of the GSM forbids zero-energy dislocation glide, giving rise to a Peierls-Nabarro barrier.